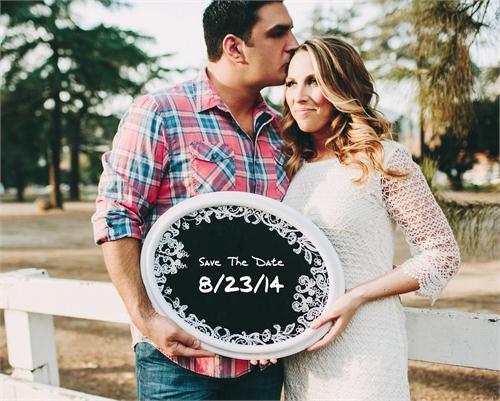 Jamie and Seggie grew up in the same town and attended the same high school in Madison Heights, MI for one year before Seggie transferred to another school in Rochester Hills, MI. She was two years behind Seggie and they didn't exactly know each other at the time. It was during that one semester that they ended up in drama class together. They were asked to act out a scene where Jamie had to slap Seggie in the face. They even had to run the scene multiple times. Jamie wasn't a fan of doing this back then, but Seggie quips that he didn't think she would have a problem with it now.

12 year later Jamie was now living in Los Angeles and Seggie happened to be in town for a recording session with his a cappella group "Straight No Chaser". He decided to reach out to her on Facebook to see if she wanted to grab a drink and she accepted the invitation. They sat outside on the terrace at a lounge on Sunset Boulevard called Sunset Trocadero. Jamie had given herself a curfew of 11:45pm, so that she could catch the last train back home. Later, she disclosed that it was because she didn't think she was going to have a good time. Well Jamie was wrong; she had a great time and ended up missing the last train that night. Seggie sent her home in a cab sometime after 2am. They ended up hanging out every night until he had to leave town. 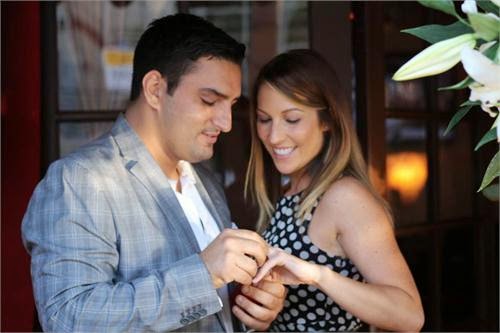 2 years later Seggie found himself trying to come up with a unique way to propose. "The beach in Malibu? Too cliche. During our upcoming vacation in Spain? Too obvious. I finally realized that I needed to keep it about us, and keep it simple." It was then that it came to him and he knew exactly what he was going to do.

Seggie was able to get in touch with the owner of the Sunset Trocadero. The owner agreed to let him stage the scene an hour before opening. 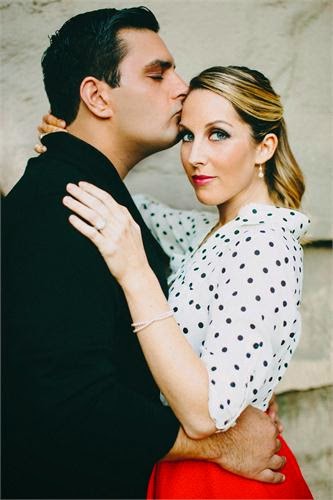 Seggie's task that day was to get Jamie to the Sunset Trocadero at 6pm and to get there before her.
He made up two cover stories to get her there and avoid suspicion. So he made up a story about friends from college being in town for a wedding and wanting to meet up for drinks before dinner. He got Jamie to wear something he knew she would be happy with later in the photos by hinting at how his friends might dress due to their plans later that evening. Seggie also told Jamie that he would be late due to a work meeting and that she should meet him after at the lounge.

Seggie arrived at the Sunset Trocadero an hour and a half before they opened to set up flowers, candles and champagne outside where they had their first date. The photographer and videographer met him there and everything was running smoothly. Jamie arrived at 6:15pm and he had made sure to have her meet him at the bar inside so that she didn't notice the setup on the terrace. She walked in, found Seggie at the bar alone and asked about his friends. He told her they were running late and suggested they go out on the terrace to have a drink while they waited. As Jamie followed Seggie outside she slowly started to realize what was going on. The photographer and videographer popped out from their hiding spots and the show was on! Seggie didn't waste any time and went right into the proposal.

"She had no idea it was coming. She was in complete shock. She said yes." 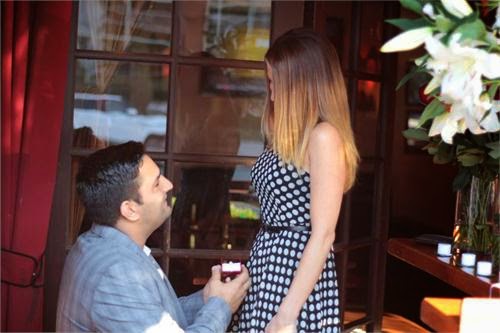 They popped the champagne and had a celebratory toast. As Jamie was soaking it all in, Seggie had another surprise for her. Almost immediately after they toasted, all of their closest Los Angeles friends arrived to join in the celebration.

About the bride & Groom...
Jamie is a Casting Manager for a production company in Los Angeles, CA called Shed Media US.
Her casting experience has primarily been in reality-docu and competition/game show styles. A couple of recent airing programs Jamie has worked on are American Dream Builders on ABC and Rihanna's Styled to Rock on Bravo. Prior to working in casting, Jamie worked alongside Creative Director Rob Wagner on a long list of live events including the Grammy's, MTV Movie Awards, and Michael Jackson's This Is It Tour.

Seggie sings in a professional a cappella group called, Straight No Chaser, which originated in 1996 at Indiana University. In 2006, a 1998 video of "The 12 Days of Christmas" gained widespread popularity and subsequently led to a five-album record deal with Atlantic Records in 2008. In May of 2013 the group released its 4th album on Atlantic Records entitled "Under The Influence". The deluxe version of the album is 17 tracks, 8 of which feature guest artists; Sara Bareilles, Phil Collins, Elton John, Jason Mraz, Dolly Parton, Seal, Rob Thomas, Stevie Wonder. 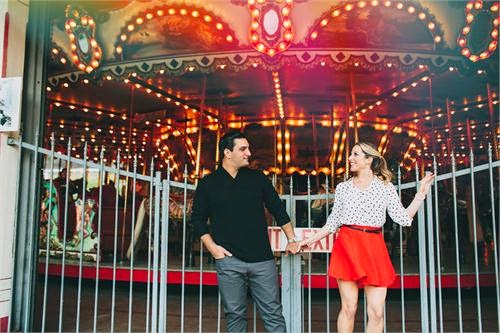 Wedding Details...
Jamie and Seggie will have their ceremony and reception on August 23, 2014 at the Masonic Temple of Detroit, MI. They describe their wedding as having taken on a unique vintage inspired theme combined with each family's different cultural traditions. The wedding will have added elements of fun including two strolling magicians and a visit from the famous Detroit Tigers' Baseball Team Mascot Paws. Jamie's favorite part of planning has been picking out beautiful floral arrangements in ivory, plum, and greyed jade. Seggie's favorite part has been planning the 22 night honeymoon to France and Italy. 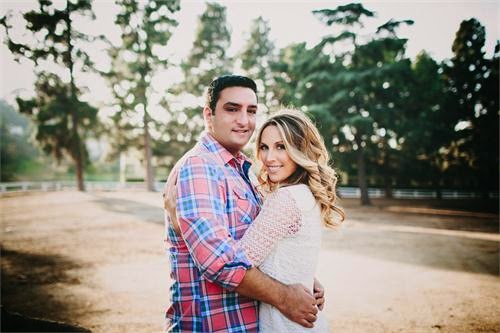 Thank You so much to Seggie and Jamie for providing us with all these wonderful, romantic stories and photos to share.
You're The Bride is very excited to be a part of your special day.