Ferbruary Couple of the Month: Liz and Kenny, Garland Lodge and Resort 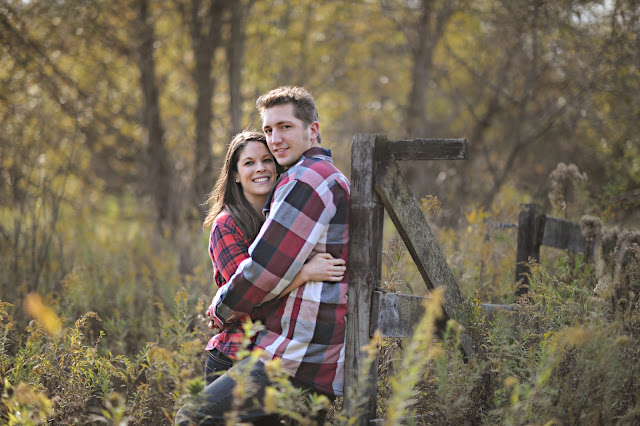 Ken and Liz actually met back when they were 5 and 8 years old and their fathers were actually fraternity brothers at Western Michigan University. Liz's parents (who were dating at the time) would spend lots of time with Ken (Kenny's dad) but once they graduated they went their separate ways. When Kenny was 5, his family moved to Shelby Township (where Liz's family was living) and Kenny's dad left a note on her parents' front door saying he was living in the area. From there, her parents started to spend a great deal of time with his parents and she would often see Kenny at various parties. When Kenny was 12 or 13, he started doing odd jobs for Liz's parents like mowing the grass, etc. and started helping her dad a lot (Liz's dad owned his own remodeling and construction company). After high school, when Kenny was 18, he started working for Liz's dad full time. She always had her "eye" on Kenny, but he was 3 years older so it felt like a bit of an age difference until she was home from college before her senior year. She and Kenny had their first "real" conversation, and the rest was history!

After 2 years together, Kenny planned the cutest proposal by bringing all of the necessities they would need to camp at a cute little cabin at Addison Oaks Park in Oakland Twp., MI. He'd brought everything there ahead of time and then brought Liz there later after she got off work. Her parents were actually married there in 1980, so they went on a walk to check out the reception area and that's when he got down on one knee and proposed after distracting her by saying, "Look, a turkey!" Liz was happily surprised and both are extremely excited for their future together.

Currently, Kenny also owns his own remodeling and construction company (Coon Creek Renovations and Construction) that he started after Liz's father retired 2 years ago. Liz is currently working as a School Psychologist for Dearborn Public Schools while also pursuing her Ph.D. in Educational Psychology.

They knew they wanted to get married outdoors and somewhere more "rustic", and they absolutely loved Garland Lodge and Resort in Lewiston, MI. They cannot believe the wedding is only 4 months away and are so excited! They will each have 5 bridesmaids and groomsmen standing up with them at the altar, including both good friends and family.

We are so excited for our bride Liz and her fiance, Kenny to be wed! We are so blessed to be a part of their big day! Congratulations on your engagement again and we look forward to a fabulous wedding come June 1st!

For more help planning your perfect wedding contact tracie@yoruethebride.com or call at 248-408-4602!

Email ThisBlogThis!Share to TwitterShare to FacebookShare to Pinterest
Labels: Coordinator, engagement, Fall, Garland Golf Resort, outdoor weddings and You're The Bride, proposal, Wedding, You're The Bride