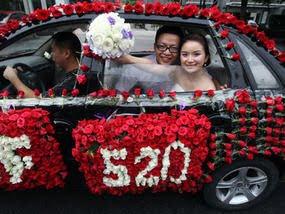 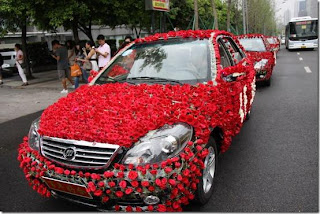 No that’s not a typo. There is a groom named Xiao Wang who resides in Chongqing, China that spent a whopping entire years’ salary on 99,999 roses to surprise his beautiful bride, Liu, on their wedding day. In central China the number 999 is considered to be a very lucky number and he had decided that he wanted all the luck he could get! This feat required that 30 cars be lined in a row with all 99,999 roses taped to them. Liu was so surprised! She loved that he had remembered she wanted a very romantic wedding. All of the flowers had to be flown in from the other side of the country due to the fact that they were a specific genus of rose. The vehicles were those of people who had answered his advertisement online to help him pull off this wonderful surprise. As an added act of goodwill 20% of cost for the roses went to a charity of Xiao’s choice. 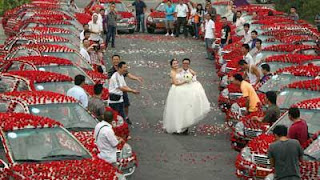 Congratulations to Xiao and Liu!